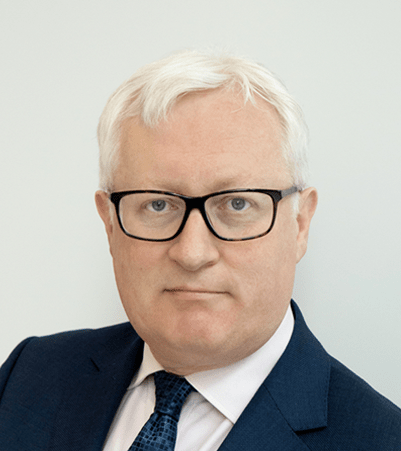 Michael is head of the commercial department. He qualified as a solicitor in 1988. Michael also practiced as an attorney in New York for two years before returning to Dublin to join a leading firm, which he later left to establish a firm that eventually merged with a global practice. He has a mixed commercial practice spanning both contentious and non-contentious matters across a broad range of sectors including financial services (particularly credit unions, insurance intermediaries and funds), real estate, IT/tech start-ups, retail and transport.

Work highlights include acting for the amicus curiae in the matter of Newbridge Credit Union Limited (In Liquidation) whose successful intervention clarified the law on the matter of the non-applicability of directors’ restriction and disqualification to directors of insolvent Credit Unions; guiding the petitioner through its court restructuring in Re Middlethird Estates, this being the first successful examinership of a construction company since the economic crash; representing Duff & Phelps in its acquisition of the insolvency and restructuring division of Farrell Grant Sparks and two subsequent acquisitions; representing a leading lighting industry company in its multi-million, multi-jurisdiction restructuring and refinance; the sale of a business sector of BHP Insurances; the sale of Sirus Engineering to Swiss company F.R. Sauter; representing United Overseas Bank, a leading Singaporean bank in a multi-party Commercial Court action; and advising CUDA, a credit union representative body in its development of a regulated fund for the on-lending of credit union invested funds to Approved Housing Bodies for the provision of social housing.

Michael continues to advise many leading credit unions throughout Ireland on a host of regulatory matters and various innovative shared services projects and new product offerings. He advised Dundalk Credit Union on a series of strategic transfers of undertakings from four neighbouring credit unions. Michael also advised on the legal framework for Peopl, a new insurance offering to credit union members developed jointly with CUDA.

Any cookies that may not be particularly necessary for the website to function and is used specifically to collect user personal data via analytics, ads, other embedded contents are termed as non-necessary cookies. It is mandatory to procure user consent prior to running these cookies on your website.

Analytical cookies are used to understand how visitors interact with the website. These cookies help provide information on metrics the number of visitors, bounce rate, traffic source, etc.